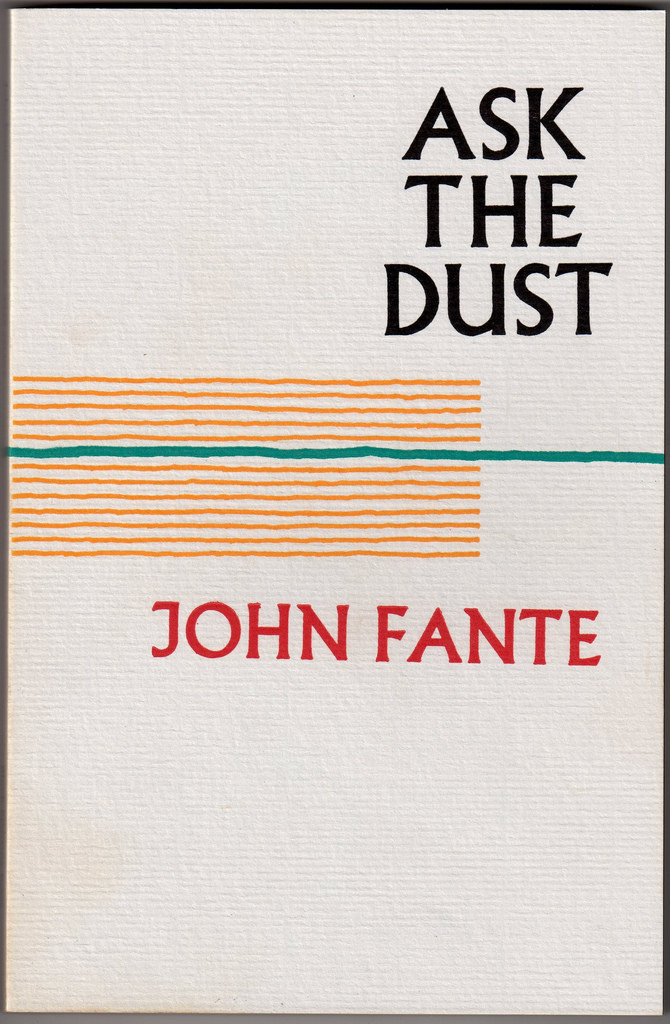 Ask the Dust opens with a brief introduction by Charles Bukowski who describes John Fante’s 1939 novel as “my first discovery of the magic.” If you, like me, discovered the magic from Bukowski’s 1971 novel Post Office then you are in for a real down-and-out, gritty, poor decision filled treat of literary realism.

Ask the Dust is a semi-autobiographical story about Arturo Bandini an aspiring author in depression era Los Angeles. With a singular published short story under his belt Arturo grapples with life, relationships, poverty, and his ability to translate these experiences into his writing. We find a man with a curious relationship with money who oscillates between subsisting on sacks of oranges with scant pennies to his name to immediately blowing through any cash that comes his way. In my mind I keep returning to the word manic to describe the personality of Bandini who can view himself in one moment as being in the lowest pits of human existence struggling to survive and in the next moment a well-timed check from his mother or publisher sends him into the highest reaches of emotional ecstasy. A similar theme plays out in relationships throughout the book with people quickly moving from dear friend to hated enemy and back again all within a single paragraph.

The novel plays with several themes around the nature of love and relationships. Bandini and Camilla circle around a manic relationship filled with passion, disgust, racism, rejection, and constantly shifting power dynamics. Bandini insults his way into Camilla’s curiosity where, despite being unable to afford a cup of coffee, he rains down upon her with criticism of her ethnic background, shabby sandals, and dirty apron. His behavior is absolutely abhorrent and curiously reflects an almost grade school like understand of relationships. You could almost imagine Bandini as the stereotypical school boy pulling on the pig tails of the girl he likes. Not quite so innocent an image when adults are involved but you can almost see the missing developmental links in Bandini’s understanding of human relationships.

It soon becomes apparent that Camilla holds the real power in this relationship. As Bandini flees from a sexually charged encounter he finds himself questioning his own masculinity and fully caught in Camilla’s orbit. We soon learn that she is in fact in love with Sammy, the bartender. Her rejection sends Bandini oscillating between mad love and hatred of a force he is powerless to control. Much of the novel focuses on this dynamic as Bandini attempts to win his way into Camilla’s heart by any means necessary. He often appears uncaring to her own desires and somewhat oblivious to her own disintegrating mental state.

Ask the Dust is an immediately relatable story about a 20-something attempting to find his way through the world. It is about place and power, transience, and an attempt to establish purpose in a largely uncaring universe. This message is clearly laid out at the conclusion of chapter fourteen when Camilla asked Arturo to read and critique her lover Sammy’s writing, whom we learn is dying. Arturo sees an opportunity to cut down Sammy with a devastating criticism and maybe even win back the love of Camilla through his superior literary prowess. Arturo feverishly pours over the manuscript and pens a scathing criticism which he immediately runs out to post at 3am. As he stands before the mailbox letter in hand under the stars and utterly quiet streets we get a profound moment of introspection where Bandini muses on the relationship between nature and man. “Here was the desert beneath these streets…waiting for the city to die…waiting for men to die, for civilizations to flicker and pass into the darkness.” Counting himself now amongst the brave men who fight back the inevitable tide of death he decides to rewrite his letter to Sammy offering genuine criticism as a fellow writer. A breakneck handful of paragraphs ending with Bandini’s own assessment of himself as “a great, soft-spoken, gentle man, a lover of all things, men and beast alike.” It was a fascinating bit of introspection and a powerful moment to see someone discover empathy.

I found Ask the Dust forced me to reflect back upon my own missteps with relationships, money, and formulating ideas about my place in the universe. I struggle to put it more simply than Charles Bukowski who described John Fante as “a man who was not afraid of emotion” whose writing had “humour and pain intermixed with a superb simplicity.” Few books leave me so fully appreciative of getting a glimpse into someone’s true self even if we don’t enjoy what we find.